My parents are putting down their first cat tomorrow. She’s 19 years old, has withered hips, arthritic back feet so bad she has to walk flat-footed rather than on her toes, and the worst disposition of any cat I’ve ever seen. No one but Mom has ever been able to pet her any where but squarely down the spine. And then only for just so long before she turns, hisses, swats and nips at you to let you know that’s enough. Frankly, she’s a bitch and always has been. To everyone but Mom, that is.

We got her when Dad was deployed to Haiti during what the troops ironically referred to as the “Haitian Vacation.” We made sure not to tell him about the addition to our household of the runt of the litter of barn cats at the local stable where my sister went to take horse riding lessons. He came home to find a bundle of black and white fur slinking its way down the hallway to which he bellowed “There’s a cat in here!” It was as funny as we hoped it would be.

But it wasn’t long before she started to overeat and misbehave by incessantly relieving herself a solid 50% of the time everywhere but the litter box. And it was this, after 19 years of tolerance, that finally drove my father over the edge. My mother, what one might call “blessed” in this instance with no sense of smell, forestalled the inevitable by dealing with as many of those messes as possible, while my father, what one might call “cursed” in this particular instance with a superb sense of smell, provided quality control to the cleanup efforts as well as backup cleanup services, called in only when necessity and my mother’s absence required. My mother even went so far as to make pads from scraps of cloth and batting that were kept in the master bathroom for the cat to relieve herself on, hypothesizing that the cat couldn’t handle either the height of the ledge of the litter box or the feel of the grit of the cat litter on her arthritic back feet. These pads were laundered regularly. But it was the four straight nights of awakening to the fighting, hissing, crapping and pissing of the older girl cat with the younger boy cat directly under the headboard of their bed that forced my father to make a stand. That’s certainly no way to live, and, were I in his shoes, combining that with all the other deteriorating health factors, I don’t know that I would be able to choose any different.

It just makes me sad. I know she’s had a good, long, well-tolerated life. Certainly much longer than it would have been if left to her own devices in that barn where they found her. And it’s not like I had any special bond with the cat. She never sat on my lap. She barely tolerated my petting her. We never shared a moment, just the two of us, that I can think back and remember fondly. She was always my sister’s cat, and after that, my mother’s. And I was always fine with that. So why in God’s name am I sad about her being put down?

All I can think is that it’s because we were in each other’s lives for so long. On the periphery to be sure, but still always there. Every time I went home she was the cranky old kook in the house who I’d be warned had developed a new idiosyncrasy while I’d been gone. She was the one who’d amuse me with her constant and insistent catterwallings at each and every meal time, hauling her half-crippled body painfully up and down the stairs, as I watched the carryings-on from a safe and removed distance. She was the one who’d scare the absolute crap out of me each and every time I closed the door to the guest bathroom where, unbeknownst to me, she’d be taking her ease and repose under the platform constructed for the washer and dryer. As soon as she realized she wasn’t alone, she’d disdainfully slink out from her lounging place and make a slow, halting break for the door. Upon finding it shut, she’d let loose with her patented, ear-splitting yowl that you had no choice but to pay attention to. Lord, but that cat had a set of lungs on her. You haven’t lived until you’ve waddled to the door with either your pants around your ankles or dripping wet from the shower, hopelessly trying to wipe the soap out of your eyes in a desperate effort to both find the door to obey the little darling’s command AND, whatever you do, avoid stepping on her and incurring her full wrath rather than just her haughty displeasure. Seriously, why am I sad again?

The bottom line is I don’t know. All I do know is that I sure am gonna miss that not-so-little pain in the ass. I’m afraid that home won’t be the same without her.

Goodbye, Package, and rest in peace. We’ll miss you. 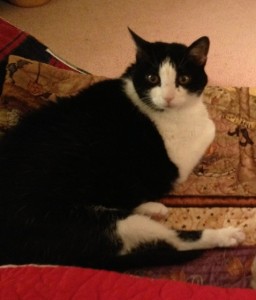 Posted under Personal Essay,Uncategorized and tagged with cats, loss of a pet, saying goodbye
Comments (2)