The Life of Luxury: I Can Get Used to This…, Part 2

After nine solid years, and many, MANY hours of overtime, I had decided that it was time for me and this “day job” to part ways.  I had initially acquired the day job as a means of survival while I allowed my ill-fated acting career time to gain traction, and I felt very lucky and blessed that the job had been able to sustain me through the worst economic crisis since the Great Depression. But now, as the economy began to awaken from its five year slumber, I realized I’d gone about as far as I could go there and it was time to move on to new and bigger challenges.

I wasn’t sure if it was the economy coming out of hibernation or if the tight-fisted old hands to the grindstones that controlled the pursestrings of American businesses at large had finally contracted a muscle cramp from holding so tightly to all that money for so long. But, whatever the reason, I had managed to find myself a new job at a great firm only two blocks away from the old one. As things would later turn out, I would repeatedly ask myself why the hell I hadn’t done this sooner. If only all transitions in life could turn out this well.

Not long after I had given my notice (but before I took my leave), one of the partners at the old firm had found himself with a pair of tickets to a New York Yankees baseball game that he couldn’t use. So he called my boss and asked if anyone in our department could use them. It was shortly thereafter that my phone rang.

Now I had learned from hard-won experience that rarely does it benefit one to linger in the office after one’s official quitting time. Sometimes one is rewarded for such sloth with an after hours phone call from the boss. Such was my reward on this particular day. With a glance at the caller ID, at the clock and a decidedly heavy sigh, I picked up the phone.

It was my boss. But for once, it wasn’t “Can you come in here for a minute?” He was asking me if I had plans for this Sunday. Having a pathetically light social life as a matter of course, I said no. He goes on to ask me if I’d be interested in two free tickets to a Yankee game. Now I just know it had to pain him to have to resort to calling me to offload these tickets. I had visions of him calling around to every single one of the 14 other people in our department before calling me. It was almost as if he were rewarding me for quitting. And I was loving it. I told him “Why, yes! I’d be more than happy to take those off your hands.” It might just be my imagination, but I was sure it was with a sense of chagrin and regret that he dropped off the tickets.

The keys to the kingdom.

Now tickets to a Yankees game would have been good enough. I had worked at the old stadium for the 2003 season before they eventually tore it down several years later.  I hadn’t been able to get up to the new stadium for a game yet and it was already their third year in the new place. But these weren’t just any tickets to a Yankees game. These were special reserve tickets with access to the Jim Beam Suite. I had no idea what that meant but whispers of free popcorn, peanuts and soda refills danced through my head with tremulous glee. I could hardly wait for the weekend to come.

When the day came, it was perfect: bright sun, mild temperatures and the glorious smells of ballpark edibiles drifting on the fine summer air. My native guide and I made our way through the crushing chaos of the courtyard to the turnstiles. Once inside, we stared open-mouthed at the soaring ceilings of the main corridor, its flags of Yankee legends towering over us like gods. This was truly the embodiment of the “Cathedral of Baseball” that the old stadium had always meant to be. It had always had the name; now it had the look to justify that title. With the sunlight and air streaming through the cut-outs in the outer concrete walls, it was a far cry from the claustrophobic tunnels of the old stadium. As a life-long devoted Yankee fan, I was shocked and upset when they tore down the old stadium. I mean, just the amount of sports history that walked through those hallowed halls and was seen from those saintly seats, names that are now spoken in hushed whispers of reverence and others that are well on their way to reverence. It just seemed impossible that such a place could be torn down without what seemed like a second thought.

But now as I walked through these newly hallowed halls, the team’s rich history practically dripping from every brick, bolt and beam, I started to understand. This was a place where one could come to pay homage to the gods of sport and pray for their success and triumph. This was a place that this sport and, in my own humble opinion, this team, could come to be properly honored. This edifice was right and worthy of their magnificence, and made you feel that you weren’t just going to watch a game, but a right of passage. This was a temple of sport and I was ready to present my offerings of peanuts and Cracker Jack.

With the kind assistance of several stadium employees pointing our dumb-founded gazes in the right direction, my native guide and I made our way up several escalators to the Terrace Level. There, directly behind home plate, we found the Jim Beam Suite. The Suite consisted of a section of primely-positioned and padded stadium chairs overlooking the field, as well as an area just off the main thoroughfare but behind the stadium seats filled with padded, wicker patio furniture. The furniture was comfortable but, with no view of the field whatsoever, they were unsurprisingly vacant.

Across the main corridor was the Jim Beam Suite Lounge. A blazer-wearing security guard checked our tickets and let us in. Inside we found a full bar, all the usual ballpark food stuffs, and TV screens everywhere you looked. There was plenty of empty seating, as one would expect during the middle of a live game, and one of the rarest of commodities in the major league sporting world: a private restroom. That would have been worth the price of admission alone. Well, that and the free peanuts, popcorn and soda refills.

With visions of how to properly take my father to a game should he ever make his way back to this fair city ever again, I wiped the sweet taste of footlong ballpark franks from my lips and we finally made our way down to our seats. And, oh, what seats they were. A perfect view of the entire ballpark, the pinstriped uniforms practically glowing against the verdent green of the striped lawn, I took a deep breath of the perfect summer air blowing in off the green, and I knew I had been away far too long. 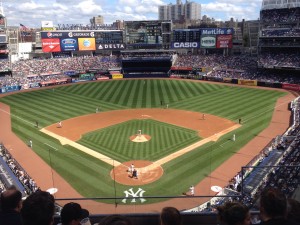 As I made my way slowly through my brown paper bag of peanuts and glowed with the satisfaction of a perfect day at the ballpark, I get a text from my cousin that he has taken a break from crunching numbers in the basement to come say hello. He has been working at the stadium for well over a decade now and was in no small part responsible for me getting my job at the old stadium during the 2003 season, a season that was lucky enough to involve an exciting, though ultimately unsuccessful, trip to the World Series. It was good to see him again and catch up, even if it was only briefly. But he wasn’t done. He presented my native guide and I with a $50 gift card for use at the Team Store. And when he walked us down there, he had a word with the store manager and also swung as an employee discount on our purchases. The result being, we barely paid a thing for the two hats and a shirt that we ended up buying. And we had money left over on the card. I mean, really. Why can’t this happen every day? It really is good to know people.

As we settled back into our padded seats with new hats on our heads, refilled Cokes in the cup holders, and a fresh bag of popcorn to finish out the rest of the game, I once again found myself thinking with a deeply satisfied sigh that this really was the life. This is the kind of civilized existence I should be living. This is the kind of thing that makes a life in this hectic city worth while. This…I really can get used to this…