Since moving to The City oh so many years ago, I have embraced the street food phenomenon with wild abandon. More than simply bagels and pretzels, peanuts and hot dogs, these street carts go so far as to offer you practically anything you damn well desire, and all without the hassle of waiting for a table. But nothing, and I mean nothing, had prepared me for the Wafels & Dinges.

An urban legend on par with the ever-elusive Cash Cab, this food truck had only ever been whispered of in hushed tones over tall pints in shadowy corners during that magic time in a night’s debauch when the drinks lose their flavor and the munchies set in. It’s then that breathy sighs of food truck legends can be heard and the tall tales of the wagon with the Wafels is mentioned. They say it was on the Food Network once but nobody can remember when or on what program. So it was with no little shock and awe that on a random evening out in the far-flung neighborhood of Forest Hills in the borough of Queens, with the nip of winter still firmly in the air, that your humble author was blessed with a sighting of the legend itself. I have tasted of the dinges and it is good.

As those of you who know me can readily imagine, it was the scent of the hot pastries caught on the cold winter wind that first arrested my attention. Hooked like a trout in a stream, I seemed to float on the breeze like a cartoon polecat, unable and unwilling to break away, following the scent as it coaxed and beckoned me onward to its truck of origin. It was there that I discovered the heaven I was sure could only exist in a higher, better plane in a subsequent existence. I was wrong; it was here and now, and I must have it. 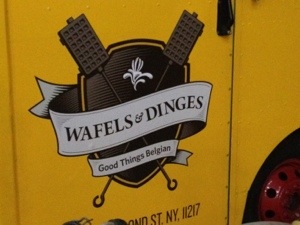 A strange and foreign tongue.

It seems the magical concoction that had arrested my olfactory attention with such vigor is made in a truck that specializes in Belgian waffles made hot and fresh right there in the back. As you can guess from the weird words and misspellings evident thus far in this narrative, the proprietors have decided to stick with their Belgian roots for their marketing and menu schtick. Despite what the more crass elements among you may have chosen to think, “dinges” apparently means “toppings” for your waffle. And, boy, are they tasty, though perhaps unfortunately named.

When it came down to it, I followed my friend’s advice and got a liège wafel with spekuloos spread on one half and nutella spread on the other. That translates to mean a soft and chewy waffle with gingerbread flavored spread on one half and hazel nut flavored spread on the other. Combine that with the powdered sugar and the drizzle of chocolate sauce, and you have what must be culinary perfection. The first bite was bliss. The second was nirvana. After that I lost track of time and space, as well as adjectives. My ears were cold and my nose was red but I hardly noticed. I only managed to look up again when the heavenly delicacy was gone. I still have no idea how I managed to make it across eight lanes of Queens Boulevard traffic safely.

I soon started to think that I had imagined the whole thing and that I hadn’t really found the magical food truck of legend. But the tell-tale signs of powdered sugar down the front of my jacket assured me that it wasn’t a dream. The truck really does exist! And someday I’ll find it again. I will taste of the wafel & dinges once more, and on that day all my dreams will come true. 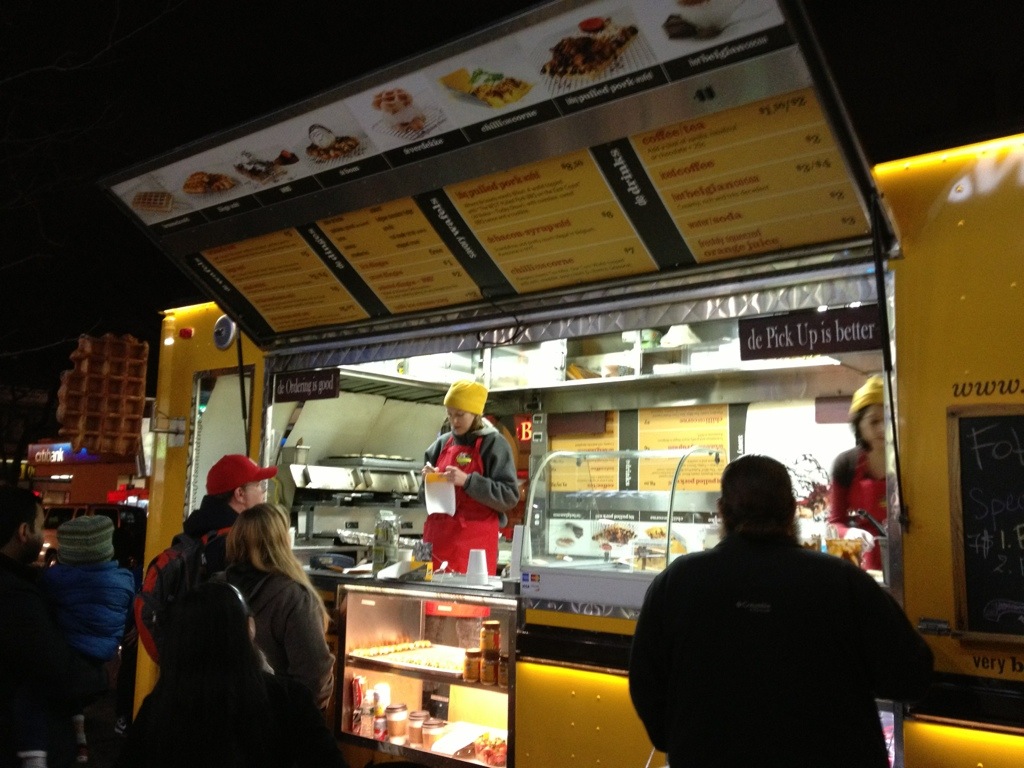 The place where dreams come true.